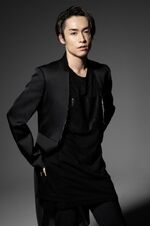 On March 5, 2019, it was announced via EXILE related websites that EXILE/EXILE THE SECOND member TETSUYA have married.

It was revealed that TETSUYA submitted a marriage notification with a non-celebrity women on March 5. TETSUYA and the women have been dating for around 3 years and both decided to marry in order to start a new path of their lives. The schedules for a wedding ceremony is still undecided.

It was also revealed that the couple is expecting their first child, that will be born this year around summer (being expected for around July).

TETSUYA is the sixth EXILE member who had married, joining HIRO, Matsumoto Toshio, MAKIDAI, ÜSA and TAKAHIRO, and fifth to have a child.